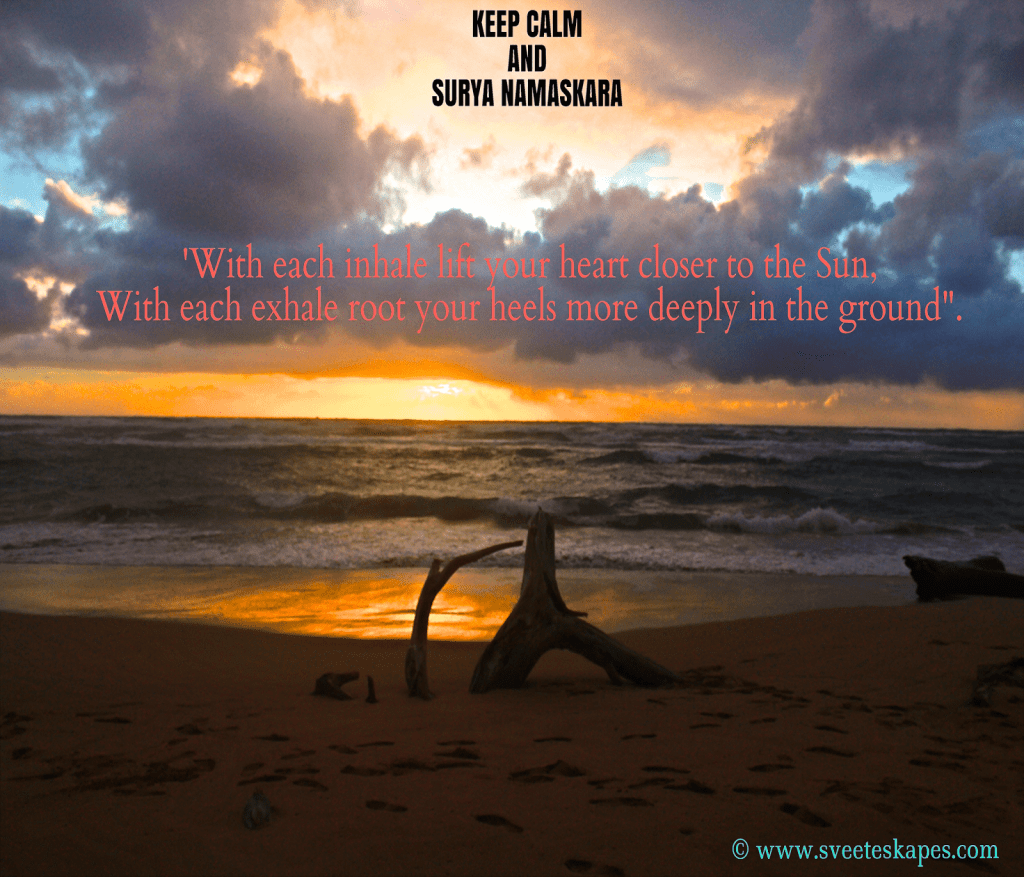 We captured this photo at sunrise on our trip to Hawaii a few years ago
Me thinks the wooden log is doing a graceful namaskara/namaste to the Sun, won’t you agree? 🙂
Surya Namaskara, or sun salutation is a set of 12 asanas (postures). It is ideal to practice Surya Namskara at sunrise, on an empty stomach (but if you are short on time in the mornings, find a time that works for you. Ultimately, something is better than nothing, riggght?).
One complete round of Surya Namskara consists of 2 sets of 12 asanas, the first set is performed moving the right leg and the second is performed moving the left leg. While you can practice as many rounds as you wish the goal is to be able to perform 108 Surya Namaskaras at once. You practice each asana by chanting a specific mantra (chant) – there are 12 mantras that are basically different names of Surya, but you can skip the mantras and get on with the asanas if you are not feeling spiritual.
I refer to Yoga in Sardinia website’s image (below) to  educate myself on all aspects of Surya Namaskara. 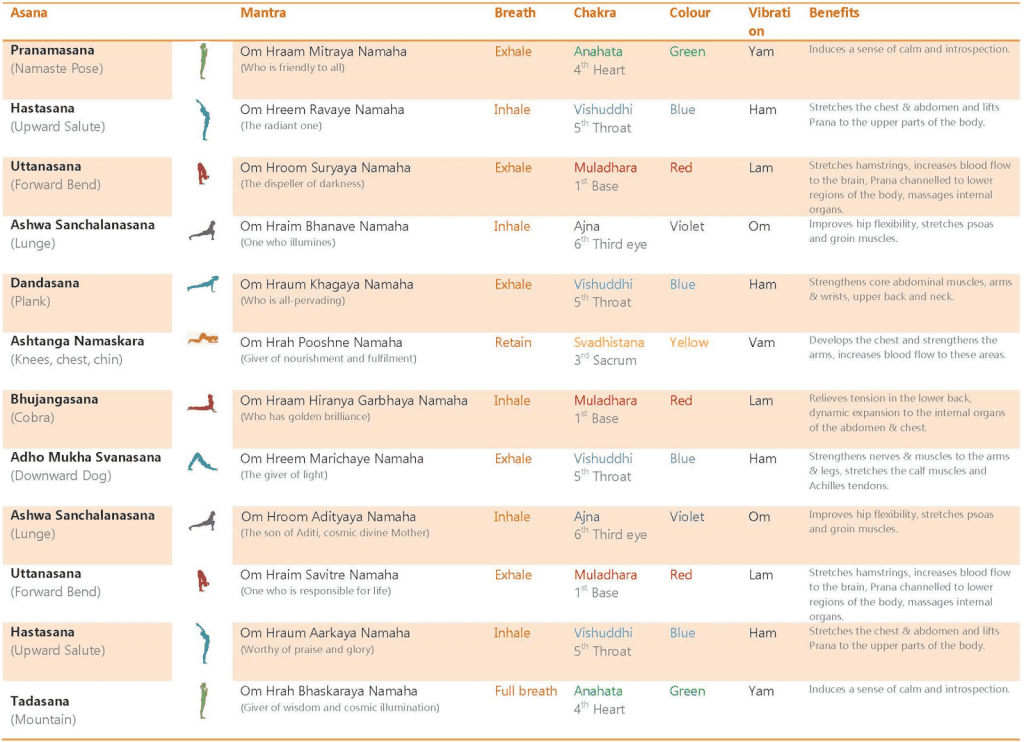 The practice of Surya Namaskara also lends itself as an opportunity to respect, honor and show gratitude to the Sun, after all he is the source of all forms of life in the universe. We also have several sun temples dedicated to this deity in India, and as a kid, I was taught to revere the Sun as a sacred god.
‘Let us adore the supremacy of that divine sun, the god-head who illuminates all, who recreates all, from whom all proceed, to whom all must return, whom we invoke to direct our understandings aright in our progress toward his holy seat.’

Science behind the benefits of Surya Namaskara
Ancient rishis (holy priests) of India have said that different parts of the body are governed by different Devas (divine impulses or divine light). They say the solar plexus (located behind the navel, which is the central point of the human body) is connected with the Sun, and the regular practice of Surya Namaskara enhances the solar plexus, which increases one’s creativity and intuitive abilities.

‘All our emotions get stored in the solar plexus, and it is also the point from where one’s gut feelings arise. The size of the solar plexus is said to like the size of a small gooseberry. However, for those who do yoga and meditation, it becomes much bigger – almost three to four times bigger than the normal size. The more expanded your solar plexus, the greater is your mental stability and your intuition.’
– Sri Sri Ravi Shankar
Benefits of doing Surya Namaskara

Tips to deepen the effects of Surya Namaskara

• Shavasana is practiced at the end of Surya Namaskara
• Pranayama (breathing) is synchronized with asanas
• Bījas (seeds) or the 12 mantras specific to each asana can be chanted while performing each asana
• Chakras are points-of-focus, when performing asanas
• In a traditional context, Surya Namaskara is performed facing in the direction of the rising sun (east) if practiced in the morning or setting sun (west) if practiced in the evening

Personal Tidbits
I was first introduced to the concept of Surya Namaskara in school , I think I was in fourth grade then (for some strange reason I still have a faint memory of my yoga teacher). The classes were held every Wednesday afternoon in a different building than where my usual classroom was (wow, my memory and it’s astonishing power to retain insignficant details), and yoga was probably the only extracurricular activity I would be happy to go to in comparison to other physical education classes (yoga inside a classroom vs. exercising in a playground in the heat – more yoga please ). Though, I have no recollection of hearing praises for yoga or Surya Namaskara and it’s benefits back then, I have come to realize over the years that yoga is something that I feel very closely connected to.
Every now and then, there have been phases (during school, college, before marriage, after marriage, and now) when I would practice yoga at home watching YouTube videos and then something else would come up in life (as if that is something new :-/) and yoga would take a back seat. It helps though, to a greater extent, that my hubby is interested in yoga too and practicing it together at home whenever we can gives me more joy than it would if I did it all by myself. And every time I pick up yoga, I learn a bit more about it, enjoy and appreciate it a little more than I did before.
So this time around, we both started with 3 rounds of Surya Namaskaras in October and are upping the number as the days go by. Hopefully we will be able to keep up with the practice and that we eventually get to 108 rounds a day.
Stay tuned for an update on when we hit 108  🙂
Web References: Wikipedia and Art of Living
‘Arise, awake and stop not till the goal is reached’.
xoxo,
Kusum 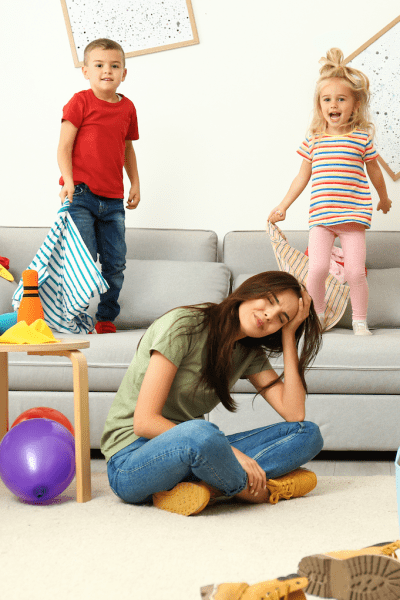 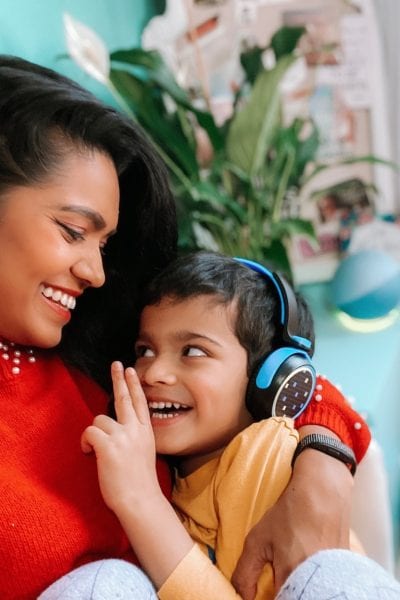 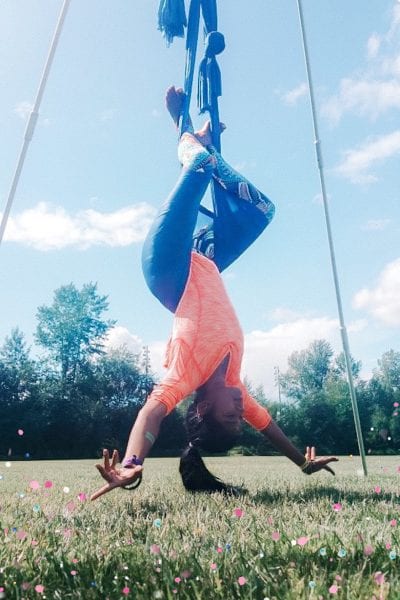 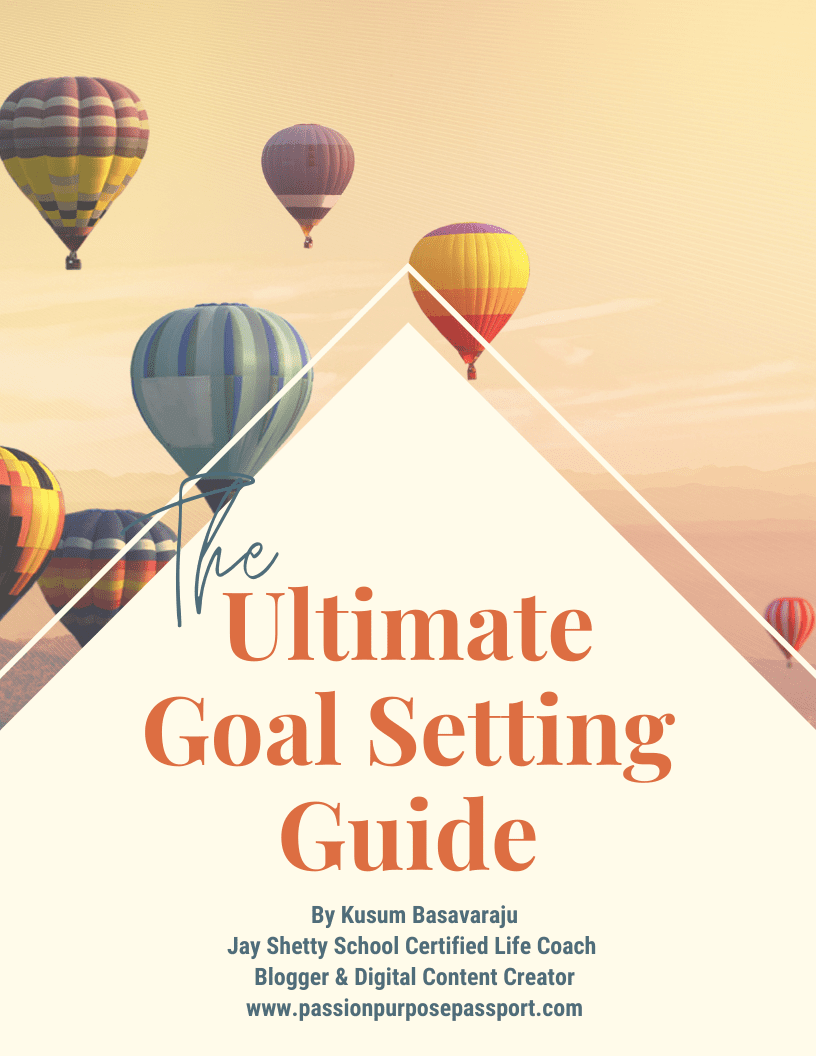